How do we cultivate generosity? 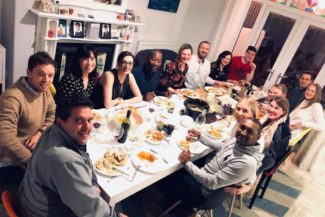 Most would agree that if more people were more generous then the world would become a better place as a result. Indeed, generosity is a character attribute that is widely admired, a quality that most people would like to be associated with. However, a person who is perceived to display their generosity too ostentatiously may be perceived negatively rather than positively by others. For that reason, we tend to be discreet about our giving and it becomes something very private.

So if we want to cultivate a more generous culture, but don’t really like to talk about giving, we’re caught in a catch 22 situation! Would it somehow be possible to create comfortable environments within which generosity can be practiced? These are questions that Common Change is constantly wrestling with. They are questions that prompted a series of Generosity Dinners up and down the country this March.

Common Change co-founder Darin Petersen kindly helped to facilitate five events in London, Birmingham, Manchester, and Newcastle. With food and friendship at the centre over 80 people were involved, gathering in homes, as well as on a college campus. Each group had a ‘common fund’ available on the night, kickstarted by Common Change and into which each guest had the opportunity to make their own contribution. How to best use the common fund became the evening’s main topic of conversation. In a friendly, cringe-free atmosphere those gathered were enabled to talk about how, in a world of overwhelming need, it can be difficult to know when and how to give.

Many sincere and moving stories were shared by the participants, of people in their communities known to be experiencing financial hardship. A clever process of consensus building followed by an anonymous voting process enabled decisions to be made. In all, over £2200 of gifts were distributed by the groups, which is absolutely tremendous. More than that though, is the way that the dinners laid the foundation for the creation of communities of generosity who will challenge one another to keep up this outward-facing generous approach to life.

So in answer to the earlier question, how do we cultivate generosity? Quite simply by getting together with the explicit aim of talking about how we can give our money away!

We love hearing the phone ring and “you’ve got mail”.